Violence Is Wailing to the Whole World 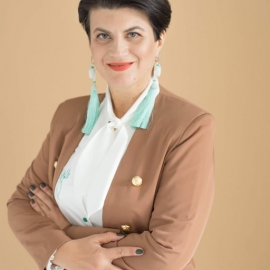 Human rights activist and writer. Co-founder and Board member of the Ukrainian Women Lawyers Association “JurFem”.

There is a mobile app with a map of Ukraine that shows the regions with air-raid alerts going off. Sometimes they wail across the whole country, sometimes they focus on certain regions.

Now I can make a map of Ukraine and mark the regions where women and children have been sexually abused by the Russian occupiers. These are the territories which were recently liberated and those which are still occupied: Kherson region, Mariupol, Kyiv region, Chernihiv region, Sumy region, Mykolaiv region, Kharkiv region, Donetsk and Luhansk regions.

Violence is wailing across the whole of Ukraine. Violence against Ukrainian women is wailing to the whole world. Women, their mothers and sisters approach me — those who survived violence and those who are looking for protection and justice for their loved ones. There will be more cases like this because the trauma hurts for a long time, it makes people speechless, but later on women will voice accusations louder and louder.

UK Ambassadress to Ukraine Melinda Simmons issued a statement after the first reports of women from the liberated territories of Kyiv region, saying that rape has been made a weapon of war by Russia which it deliberately uses in Ukraine.

Society often sees rape, like other sexual crimes, not in terms of violence, but in terms of sex. It seems to be a kind of peculiar sex rather than violence. In peacetime, it is the rapist who makes a decision to rape, and this criminal offence must be punished. Society should not look for excuses for such crimes, for rapists. There are none.

It's all about the system.

It is about the tradition of acceptable military behaviour.

It is about the procedures of Russian servicemen.

It is about theorders of military command — implied or explicit, written or unwritten.

It is also about the acceptance of violence by the Russian government and society as a norm: domestic violence is not a criminal offence there, so it is a social norm.

Beat the dog before the lion. Beating your wife is a sign of love. In published intercepts of phone conversations between occupiers and their mothers and wives, we hear approval and encouragement of rape. Intonations of flirting, joking, admiration of their man. Our brain and heart refuse to accept it. Because it is not human behaviour, because a woman cannot react in this way to another woman's torture? Or can she? Because it is the norm?

There is a judgment of the European Court of Human Rights in the case of Volodina v. Russian Federation, in which the ECtHR declared that Russia's state policy ignores this problem, putting first and foremost Russian women in danger, at risk of torture and death.

As shown in the judgments of the ECHR regarding Grozny, during the two Chechen wars the traditions of the Russian army included raping Chechen girls in front of their mothers, raping mothers in front of their children, breaking limbs, knocking out teeth, pulling out hair, smashing knees, raping until victims would bleed and executions by shooting.

Our bodies are witnesses of what is happening to us. Even more reliable witnesses are our souls, our memory, which does not allow us to forget, despite the pain and mourning.

How Ukrainian Feminist and LGBT+ Organizations Work during the War
Alyona Gruzina
From Kharkiv to Lviv, from Kyiv to Mariupol, from Zaporizhzhia to Vinnytsia — we have all changed our plans and daily activities and abandoned the usual for the sake of winning the war against Russian occupation. Feminist and LGBT+ organizations also contribute to the struggle. What exactly do Ukrainian human rights initiatives do and how can they be supported?
Детальніше »