Salem, H.: The Spectre of Berehynia, Opinion and Analysis

In this article, Harriet Salem describes how the figure of the Berehynia, a protector of the nation, has become a metaphor for matriarchal social structures in Soviet and post-Soviet Ukraine. The Berehynia is often used as a symbol of women’s central role in society, yet de facto, women have very little power in contemporary Ukraine. During the Orange Revolution, the female politician Yulia Tymoshenko repeatedly positioned herself as the caring nurturer of the Ukrainian nation. Yet Tymoshenko and her party blocked attempts at progressive legislation on gender. Feminist groups such as FEMEN have used the Berehynia-symbol of femininity to showcase its paradoxical nature. Feminist grassroot movements present in Ukraine have a hard time gaining general popularity, potentially because the Berehynia illustrates a deeply rooted identity crisis of women’s social role in Ukraine.

In this chapter, Oksana Kis points to two dominant models of femininity in post-Soviet Ukraine. That of the Berehynia and that of Barbie. The two models both draw attention to female bodies. The Berehynia emphasizes the woman’s abilities of reproduction, nurturing and mothering, whereas the Barbie doll - the ultimate symbol of Americanization and globalization in Ukraine - draws attention to women’s bodies and women’s sex appeal, insinuating that women are made for men’s pleasure. Though these two ideas of femininity are dominant, many women in contemporary Ukraine promote and demand new sources of female identity, where women are seen neither as objects nor as designated servers of others’ needs. 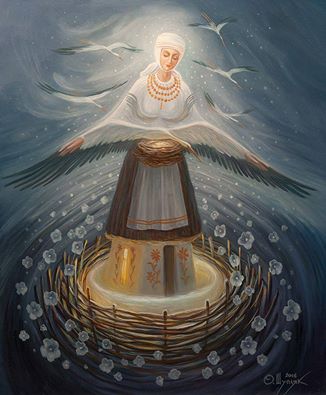 In this article, Rubchak uses data from the media, advertisement, gender conferences, etc. to explore the conflicting discourses on female empowerment. By presenting initiatives aimed towards debunking gender stereotypes and promoting equal rights, she shows how old and new perceptions of gender constantly compete and intercept in the Ukrainian debate. Rubchak argues that though change is happening slowly, gender perceptions are in fact changing. Feminist discussions have, after all, been alive and well since Ukraine became independent.

According to Oksana Kis, understanding present day’s gender order in Ukraine requires a profound understanding of Ukrainian history regarding gender. In this article, she discusses four dominant narratives of women’s roles in Ukrainian history: The Berehynia (women as protectors of the family and the nation), The Great Woman (women as contributors to the national cause), National Feminism (the national cause as superior to feminism and any other social movement) and Women’s Devotion (women suffering and sacrificing themselves for their nation). She notes that women are discursively presented as one unit, whereby they are denied diversity and individuality. Also, in continuously failing to represent women in historical accounts, women are instrumentalized and subordinate to the general, male-centred historical accounts. According to Oksana Kis, placing individual female accounts at the centre of historical research is a way of assigning agency to women, and such approaches are slowly becoming a trend in Ukraine.