In this article, Oksana Kis explains the events surrounding the recent shift in the social meaning of International Women’s Day in Ukraine. During the Soviet regime, International Women’s Day lost much of its critical feminist essence and instead became a propagandic celebration of women. From people across the political spectrum, women are celebrated on this day for their beauty, grace and femininity. Also, their role in the family is praised through gestures of flowers, etc. In recent years, feminist groups have started to address the hypocritic nature of celebrating women one day a year instead of using this day to improve women’s rights and mark women as full-fledged members of society. In 2009, women went out into the streets for the first time in Ukrainian history to criticize not only the hypocritical celebration of International Women’s day, but also to claim equal rights and counter gender-based discrimination. In the years following 2009, activist groups have continued rebranding March 8th. For example, different events and historical art-exhibitions have served to show the importance of women’s emancipatory activism through history, encouraging women to continue to work for equal rights. 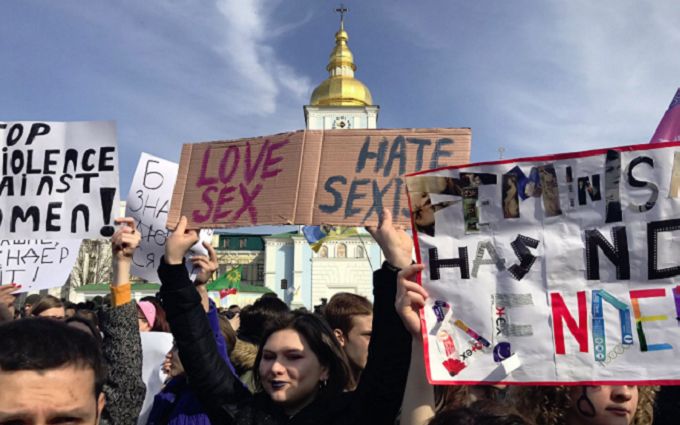 In this article, Lokot discusses and analyses internet-based feminist activism based on 3500 Facebook posts from the online campaign #ЯНеБоюсьСказати, or in English #IAmNotAfraidToSayIt. The campaign was initiated in July 2016 by a local activist to raise awareness of sexual violence and sexual harassment in Ukraine. Lokot argues that activism and debate on social media platforms can affect the discursive status quo of an issue in society. Networked feminist activism can thus be effective, even when consisting only in conversations about everyday rights and shared experiences of injustice. The shared stories linked women’s rights and gender justice to common experiences, enhancing solidarity and fuelling feminist critique of gender discrimination and gender-based violence. The accessibility of social media platforms allows for a broad participation in everyday politics and brings issues into motion by raising awareness.

Zubatenko, V. (2019), ‘On gender studies, radical attacks, and relationship with her body’, Feminists of Kyiv

In this article from 2019, Valeriya Zubatenko describes her encounters with gender discrimination in different periods of her life, and she explains how gender norms affected her understanding of herself and her body. In university, she became involved with an LGBTQ-organization, and she formed a group named ‘borsch’ that works to challenge gender stereotypes. In this article, she describes how right-wing radicals used violence and dominance to obstruct the organization’s work. After these violent events, she was not supported by the university, but accused of putting members in danger and told to shut down the project. The article beautifully explores the hardship of being an activist as well as the joy and necessity of being an activist - if not for yourself, then for future generations.

In this article, Jessica Zychowicz discusses the impact and methods of the activist group FEMEN, which operates in several countries and uses mass media and pop-culture as a scene for impact. It was formerly a commentary on Ukrainian women’s rights, whereas today the group provokes global discussions of what feminism is. Zychowicz argues that FEMEN’s performances plays out on two levels: a retrospective of the pitfalls of the Orange Revolution and a feminism that builds on differentiating women from men, East from West. Yet there is little unity in the group’s expression with regards to how change and progress should happen. FEMEN manifests the presence of system critique in contemporary information- and media-culture with their provocative approach. However, Zychowicz fears that if the public debate of women does not become more nuanced, transcending divisive categories of identity and seeking peace will not be possible.