Anzhelika BIELOVA: “My task for the coming year is to support women in difficult life circumstances and to create for them long-term opportunities for a full life and development in safe cities of Ukraine.”

19
Читайте також:
Nina LEVCHUK: «Since the war has been already going on for 8 years, it is very important to think about how we will later rebuild the country and restore the economy, build new modern opportunities in the country, provide these opportunities»
Oleksandra ROMANTSOVA, human rights activist, executive director of the Center for Civil Liberties
Ksenia BUKSHINA: “My personal dream and goal at the same time my is to make the life of Ukrainian women safer and more comfortable”.
Sofia BURTAK: “We plan to distribute our forces in order to support rural women or involve them into project initiatives”
Iryna TSYBUKH: “The injustice experienced by the children of war will never let us give up on victory or make any compromises”
Natalia CHERMOSHENTSEVA: “In all communications, we constantly say that dignity is a basic human need”
Olga SERDYUK: "The war has put everything in its place, and mine, here and now, is in the vortex of events, not only with Ukraine in the heart but also in the heart of Ukraine."

My name is Anzhelika Bielova, I am a Roma activist. The female line of my family belongs to the Servian ethnic group within Roma national minority, which is a Ukrainian Roma people, who have been living on Ukrainian terrirory for a long time: my great-great-grandparents were born in Komyshuvas (Zaporizhzhia region) around 1870.

I was born, grew up and studied in Zaporizhzhia (Southeastern Ukraine). While still a student, I was awarded a scholarship of the Roma Educational Fund, which supported Roma youth in obtaining higher education, and I learned project management and other skills for my further activities in the defense of human rights. In 2016, I joined a local Roma non-governmental organization and implemented more than 20 social projects aimed at improving Roma access to education, employment, self-organization of Roma population, and communication with law enforcement agencies. 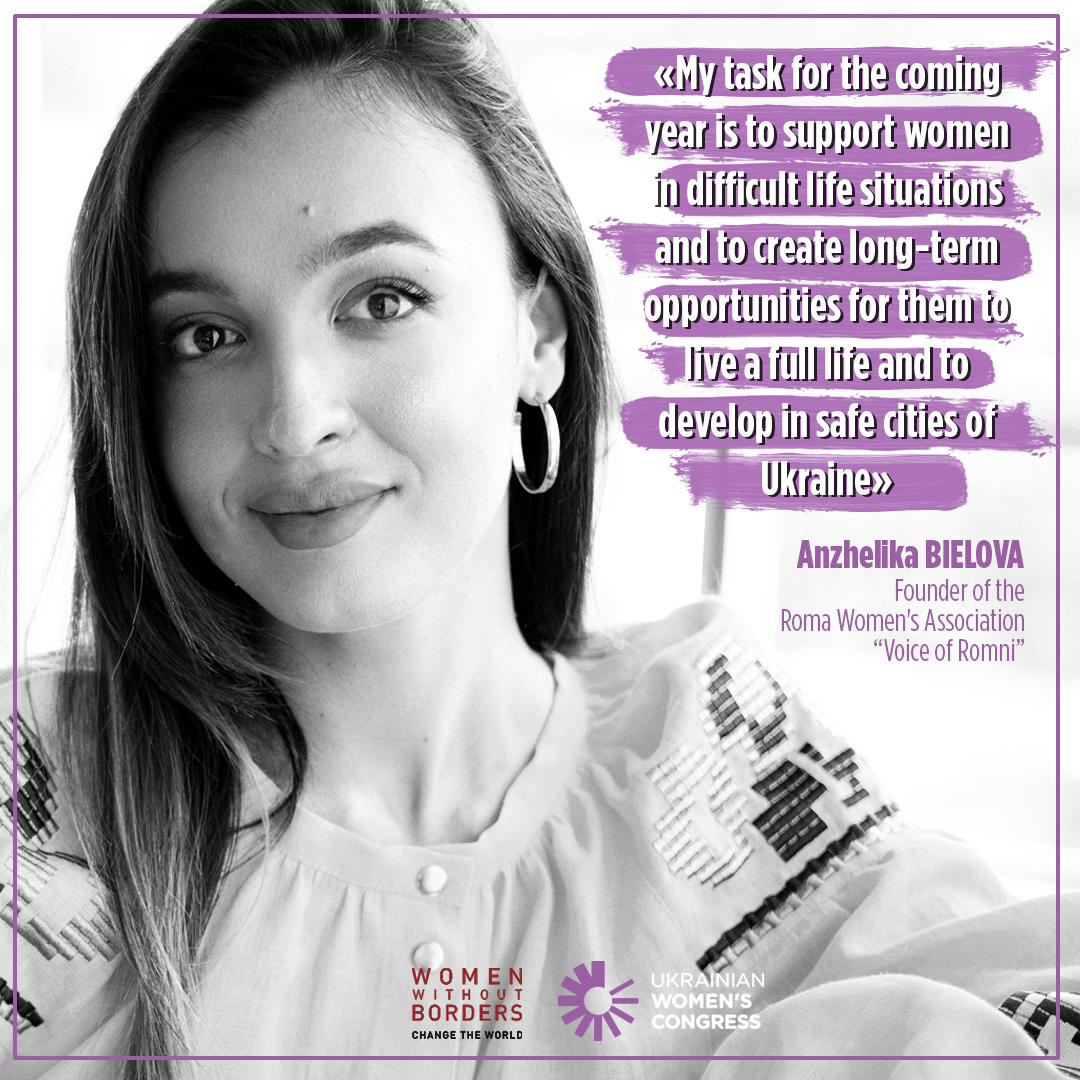 To change the unequal position of women in Roma community

I have always been concerned about the unequal position of women in the patriarchal Roma community, so in 2020 I founded the public organization Roma Women Association "Voice of Romni". At that time, Romani women were severely affected by the coronavirus pandemic, many of them lost their income, because they worked in markets that were closed due to Covid-19. We conducted a survey of our target audience and found out that almost 60% of our respondents did not have school diploma, 14% had no education at all. Therefore, we created a project that gave women the opportunity to master specialties in beauty industry and archive self-realization. We supported women with starter kits to quickly launch their practice. The project was successful, 74 women received a specialty and found an employment.

We dreamed of opening a social beauty co-working space with a children’s room and a babysitter, which would give mothers with many children and solo mothers an opportunity to work. We planned to direct the profits from such activities to university scholarships for Roma girls. We wrote a business plan and were looking for financing, but the war changed the plans.

Humanitarian aid to Roma communities during the war

On February 24, we woke up to fighter jets flying over our house and explosions. My husband then said the most terrible words in my life: “The war has started.” What followed was despair, tears, a struggle of motives and the decision to leave; that day we were fleeing as if from death: together with my friend and my daughter, we crossed the border to Hungary. My husband stayed in the country, he said it was his duty.

From the first day of my forced stay in another country, I was haunted by a sense of guilt, because I was safe, and people in Ukraine remained under shelling and rockets, without work, often without food and housing, without means of subsistence. Therefore, I actively began to look for opportunities to support Ukrainians and soon, together with my colleague, we held a charity evening in Budapest, during which we collected more than 110,000 hryvnias and bought bulletproof vests, tourniquets, and bags for our defenders from the Armed Forces of Ukraine who were fighting on the front lines.

I have also managed to secure financial support from donors and coordinate the assistance for about 2,500 people. Thus, thanks to the support of EVZ Foundation, we have provided humanitarian support (food kits, medicines) to the Roma of Zaporizhzhia, Dnipropetrovsk, and Kherson regions, organized an evacuation bus for 34 people from Zaporizhzhia to Bremen (Germany), and purchased protective clothing for defenders. MADRE Foundation has provided financial assistance for the purchase of hygiene and food for children, which we, in coordination with volunteers, distribute to families in difficult life circumstances in Zaporizhzhia, Kryvyi Rih and Kherson. International Renaissance Foundation has provided support for the provision of humanitarian aid (food kits, medicines, hygiene products) to the Roma of Zaporizhzhia and Roma who has become internally displaced persons.

International advocacy for the rights of Ukrainians, who flee from the war abroad

In addition to project activities, the work at the international level is important to me: the advocacy for the rights of Ukrainians who were forced to leave the country and seek refuge in European countries. I am also involved in the coverage of the war in Ukraine after the unprecedented full-scale russian invasion. Since February 24, in all international speeches, I have been emphasizing that Ukraine is currently fighting for democracy and human rights in every country in the world, losing hundreds of defenders and civilians every day. That is why every country should now show its proactive solidarity with Ukraine and Ukrainian people: help provide shelter to Ukrainians, supply arms and ammunition for defenders, provide humanitarian aid to Ukraine, as well as constantly cover events in Ukraine and talk about the needs of Ukrainians.

To participate in the restoration of the country

An extremely important stage in the reconstruction of Ukraine after the war is the restoration of the economy and ensuring its stable growth. It is important to create jobs and permanent sources of income, support the advance of enterprises in Ukraine, support the relocation of businesses from temporarily occupied territories and create employment opportunities for internally displaced persons who were forced to leave their homes due to the war and seek safety in other regions of the country.

Ukraine has received the status of EU candidate, which necessitates further harmonization of our legislation with the European one. Ukraine has already taken one important step – it ratified the Istanbul Convention. The task of women movement and women non-governmental organizations is the joint implementation of the tasks of the Convention with the state structures, the purpose of which is to destroy gender stereotypes that allow violence against women.

I see my main task for the coming year as creating opportunities for families of internally displaced persons, for women from vulnerable groups, in difficult life circumstances, providing long-term opportunities for a full life and development in safe cities of Ukraine. Among the tasks are the provision of social housing, development of entrepreneurship, job search, education for adults, creation of children spaces, so that children from vulnerable groups have access to preschool, remote education and can increase the level of knowledge, which has decreased due to the impossibility of access to the educational process during military operations.