Sofia BURTAK: “We plan to distribute our forces in order to support rural women or involve them into project initiatives”

40
Читайте також:
Nina LEVCHUK: «Since the war has been already going on for 8 years, it is very important to think about how we will later rebuild the country and restore the economy, build new modern opportunities in the country, provide these opportunities»
Oleksandra ROMANTSOVA, human rights activist, executive director of the Center for Civil Liberties
Ksenia BUKSHINA: “My personal dream and goal at the same time my is to make the life of Ukrainian women safer and more comfortable”.
Iryna TSYBUKH: “The injustice experienced by the children of war will never let us give up on victory or make any compromises”
Natalia CHERMOSHENTSEVA: “In all communications, we constantly say that dignity is a basic human need”
Anzhelika BIELOVA: “My task for the coming year is to support women in difficult life circumstances and to create for them long-term opportunities for a full life and development in safe cities of Ukraine.”
Olga SERDYUK: "The war has put everything in its place, and mine, here and now, is in the vortex of events, not only with Ukraine in the heart but also in the heart of Ukraine."

My name is Sofia Burtak. I have a PhD in political studies. My main education is political studies, but my field of activity - agriculture and rural development in particular. I came probably 15 years ago to a project of international technical assistance of the Canadian government to help farmers and small rural producers. And my main role 15 years ago was to promote equal opportunities for women and men in the context of implementing agricultural technical assistance projects. It was not easy, because the understanding of gender equality in agriculture, both then and today, needs to be defined taking into account production technologies and access to resources. But over the years, my team and I managed to determine where gender is in milk, grain, and fruit and vegetable sector. 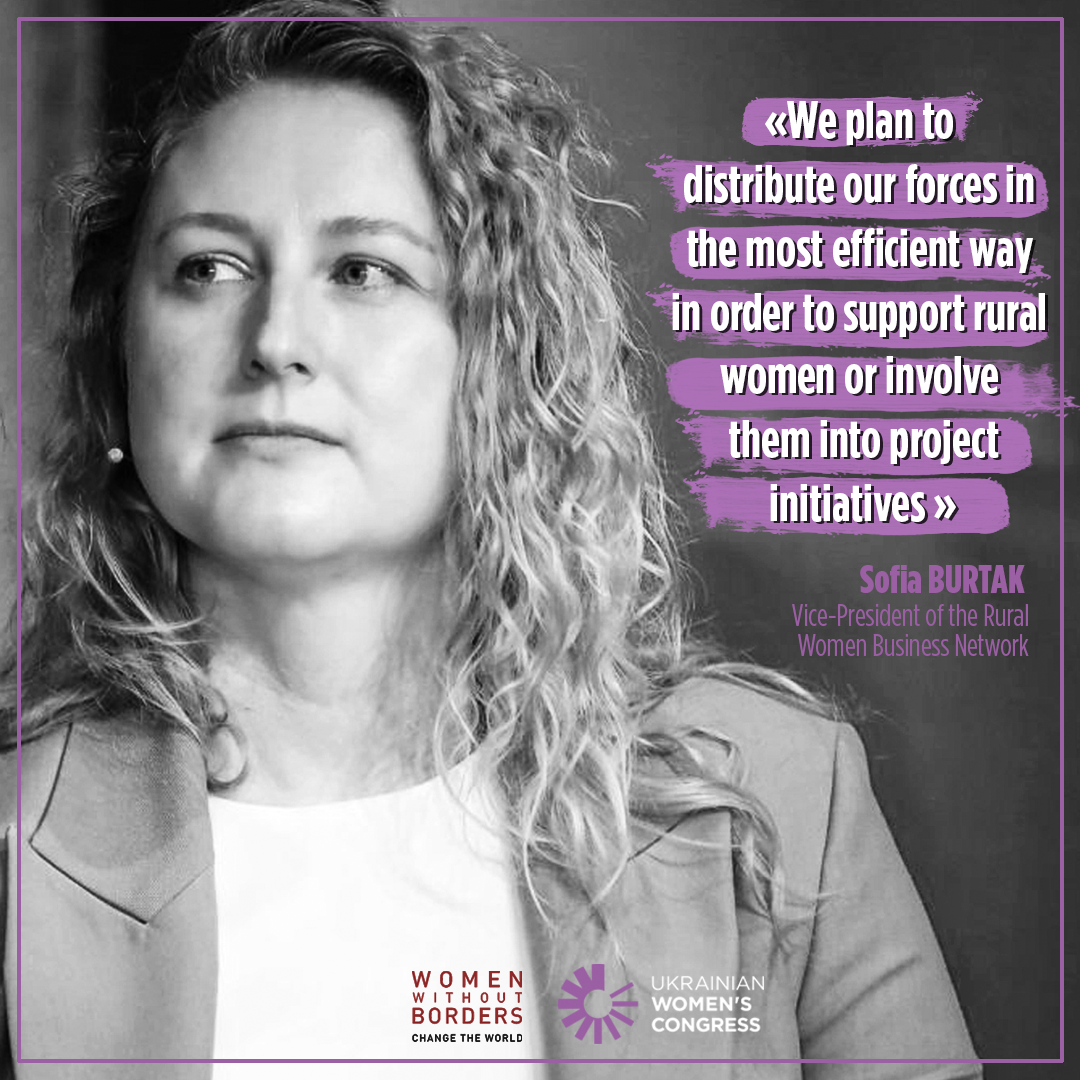 Today I can say that we work in 14 regions of Ukraine permanently and distantly consult manufacturers from other regions.

In fact, for the past three years, I have worked mostly in Donetsk and Luhansk regions. We worked on the territory controlled by Ukraine.

Evacuation instead of strategy implementation

On January 17-18, 2022, we held a strategic session in Sviatohirsk and defined priorities for Luhansk region in the development of cooperatives and, especially, in women’s initiatives. We have a separate fund specifically for financing women’s businesses in the village - not only the agricultural sector, but related women’s entrepreneurship as well. We have also launched the business network of rural women in all regions of Ukraine. This is more of a horizontal association of our women from different corners and different fields. In fact, the forums we have held since 2016 have been an informal association. And in 2021, we formalized into a public union.

At our last strategic session, we identified three priority directions for the development of Luhansk region and had to proceed to their implementation. I will also add that in December 2021, the agricultural cooperative Products of the East was founded in Donetsk region, which was registered in Nikolsk near Mariupol. This was unprecedented - for the first time we made a multifunctional cooperation, that is, women and men from different sectors and different chains of added value - milk, vegetables, grain, berries for finishing, processing, marketing and procurement - joined together.

On the eve of February 24, we planned to hold several events, but were forced to cancel them. I was disappointed that I could not organize so many good events for the mobilization of women’s leadership together with the UN Women Structure in Sumy and Kherson communities that were supposed to take place. But, on the other hand, on the day of the full-scale invasion of russia, there was such a shock about the safety of people who, thank God, stayed with their families in different regions and could take care of their own safety.

On February 24, we mobilized, we had an evacuation plan since the beginning of January. And on this day, we activated all our evacuation procedures. As I was authorized to be the receiving party, I had to accept all the people from different parts of Ukraine who were on the way.

Humanitarian aid is being organized and is gaining new turns

We were thinking out routes from Dnipropetrovsk region to Lviv region. And starting from that day, I accompanied the evacuation of both our office employees and farmers from Donetsk region. Unfortunately, people did not have time to leave Luhansk region in the first week of the war, we worked with Stanytsia Luhansk and Novoaidar, Starobilsk. They (the occupiers - ed.) blocked the roads there very quickly. And from Donetsk region, I accompanied the families of our farmers, who were leaving, on the way, and settled them along the way. Because in the first weeks, 900-kilometer journey took three days.

In Zaporizhzhia, we are still arranging the lives of our female farmers, who were able to leave in the first evacuation wave, little by little. Kherson region was blocked on the first day, the roads were shot through and it was too dangerous to move. Not all women had access to cars and driving experience to quickly join the humanitarian convoy. And women in the villages often had no information about when and by which route the humanitarian convoy would go.

In humanitarian terms, we also cooperate with Kraków volunteers from Omio Foundation, who help the affected rural areas directly. Therefore, we can ship humanitarian aid to rural areas and cover the first, urgent needs. This kind of aid is now being organized a little, sometimes it subsides, then it takes on new challenges. The situation is very dynamic, because the war continues. For me, this is the second line of permanent work: the logistics of provisioning, and manual loading and unloading.

Now we are trying to solve the problem faced by women with triple load. Because they must take care of the front and work for provisioning, because there are a lot of requests - both food, household, social. Village women have found themselves in this trap.

Also, rural women meet the needs of people resettled in their communities, and this is their own resource, because cooking, feeding, and growing are also up to them. And thirdly, they haven’t been taken away family duties and responsibilities of production, running a household: this includes taking care of the family, children, and elderly people. And, we see now especially clearly, if the component of men’s work in the economy withdraws, then a huge issue of technologization and mechanization of women’s work arises.

That is why now we would like, by virtue of the Rural Women Business Network and together with our Canadian partners and UN Women Structure - to take care of mechanization. At least try to “free the hands” and time of rural women. Because the banal washing of dishes is time-consuming, but it can be solved with a dishwasher. Simple dough kneading can be solved with kneading equipment. If we talk about the rest of operations, which are still the responsibility of women and organized by women - baking, washing, all maintenance work, growing vegetables and animals – all of them is possible to mechanize, you just have to talk sincerely about it. And when a male’s help in the household withdraws, because it has been mostly done by the whole family, then the entire work load falls on rural women.

We have a very short planning horizon

Today, when we live in a state of war, I personally feel the work is moving by very small steps and it is necessary to respond to everything quickly and immediately. It can happen that you get a call at 7 a.m. and you have to be in Krakow at 6 p.m., for example, because you have to pick up, load, and give out.

That’s why, planning today is a big challenge for everyone, in all areas.

We will review the needs for the next six months. We already understand the conditions in which our rural women are. We have women who are in the occupied territories. We have women who are in the war zone who may be evacuated or may remain in place. There are women who have been relocated to other territories, they can settle in villages. They may be urban, but moving to rural areas will have its own challenges. Or rural women in the city, they will be in different conditions. And, also, there are women who receive, settle, provide in the villages too.

We plan to distribute our forces in order to support rural women or involve them into project initiatives. Since we are a business network, we still focus on the enterprise and the stages of economic recovery. And we have seen that it is possible even during the war. No one has frozen their activities, people are still working in the villages, but they need much more support and help.

​​It is necessary to advocate the needs of women

We observe a disturbing centralization after decentralization processes. And primarily our women suffer from this. Because the revenues to the local budget are decreasing, and the challenges of local self-government are only increasing. And now they have less contact with the central government.

That is why we are very much in favor of different communities, women’s organizations, and women’s networks to be included in advocacy processes. Today, the salaries of female heads of the united territorial communities are very low, and not only of the heads, but of the entire composition of the territorial community. The provision on which they work - both humanitarian, military and social – is a crazy challenge. So, advocacy is on top!

In order for them to be heard, this environment must be formed by our entire gender community, all central level organizations. We work completely in the field: in villages, in regions. And we always needed a partnership at the level of Kyiv, at the central level, for rural women to be heard with all their needs and problems.

It is true, we are working now to ensure that their needs are formulated into interests. This is a difficult and challenging process, because the needs are felt urgently here and now, and formulating them correctly in the interest of the political, economic, and social context is not easy, it is a separate job.